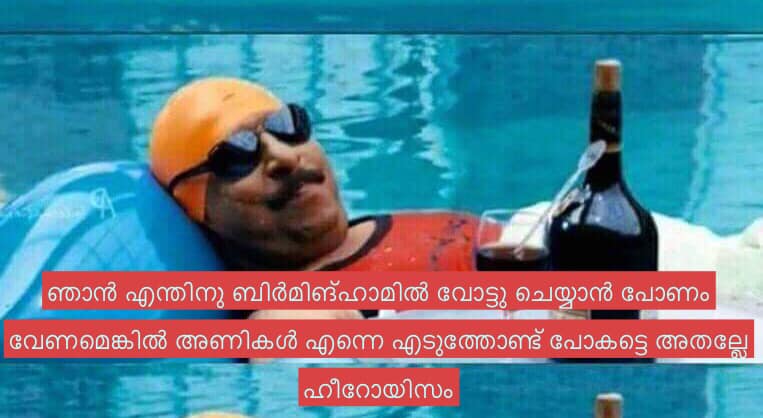 One of the trolls poking fun at the voters. UUKMA elections saw a good number of trolls. Picture Courtesy Noby K Jose

LONDON March 10: The much awaited UUKMA (Union of UK Malayalee Associations) elections were held yesterday Saturday March 9, 2019 at the St Edmund Campion Catholic School in Birmingham. UUKMA is an umbrella organisation which has affiliation of majority of the UK Malayalee associations scattered all over the UK and thus the elections are hotly contested once in two years.

UUKMA over the years have been driven by some very forward looking UK Malayalees and thus the organisation was able secure a place among the community. Although there is still yet long way to go to get every organisaton under its wing its efforts in the last seven years have been stupendous with regular activities to keep the community vibrant.

The organisation always strived to keep religious differences at bay. However, a protest on Facebook arose as a result of a priest seeking to win votes for one of his favourites in the elections.

The noted priest who has been involved with several charity activities including organ donation, in his Watsapp video message was asking the voters to elect a particular candidate. This website too received a copy of the watsapp message circulated within the UK community.

This evoked protest from various individuals across the UK. However, the candidate, the priest asked voters to support lost in the elections sending out a message to those religious leaders that they will not be influenced by such unsolicited influence by people those who think they hold a say in people’s daily lives. This also sends out a strong message from the UK Malayalee community to all those religious leaders to stay away from such involvements which are a norm in Kerala.

The elections went ahead and a new panel was elected as below:

This website wishes all the new office bearers a wonderful two years to serve the community in the rights spirit and be  torch bearers for Malayalees all over the world including Kerala.