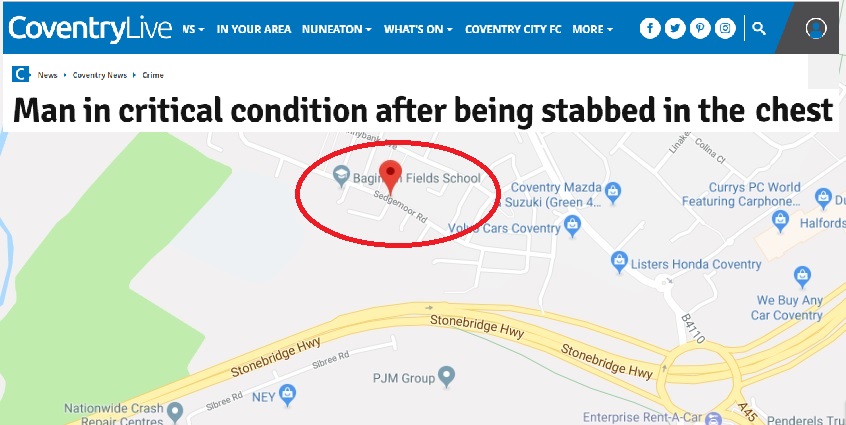 COVENTRY March 19: A 36 year old man is reported to been hospitalised after being stabbed in the chest “accidentally” on Sunday March 17, 2019. Police and ambulance were called at a house in Sedgemoor Road in Willenhall on Sunday evening around 5.30pm. The stab victim was taken to Coventry University Hospital with a serious injury to his chest where he remains in a critical condition.

A 37-year-old, who is known to the victim has been arrested, Coventry Telegraph reported. The get together is said to have been organised at the perpetrator’s home.

In a statement to CoventryLive this morning (March 19), West Midlands Police has revealed that the injured man was stabbed accidentally by a friend. A spokesman for the force said: “The victim and suspect – who are long-standing friends – were spoken to over the incident and both have independently said this was an accident and there was no intention to cause injury.

“The victim does not wish to press charges and the man has been released without charge.”

Local reports from Coventry says that victim and the perpetrator were Malayalees who got together for a weekend party at Sedgemoor Road. Both are said to be from Ernakulam district.

Unconfirmed reports say that the two are friends and known to each other from school days and no one can confirm what lead to the ugly incident.

Weekend parties are a norm within the UK Malayalee community where alcohol is involved. There are several splinter groups friends who join together for some fun. However, when alcohol kicks in some of the arguments turn nasty and this in turn leads to grudges. However, this is the first time a get together within the Malayalee community is reported to have lead to an “accidental stabbing”.

All this comes at a time when London is reeling under incessant knife attacks each day. Finally the Malayalee community too has become part of this whole knife attack scene although this is a stray one.

Interestingly, it is reported that the incident came to light through a Watsapp Prayer Group where people were calling to offer prayers to the victim who is seriously injured in the attack.

Meanwhile, it is reported that the number of admissions to hospital for knife wounds in Coventry has hit its highest level for five years. According to Coventry Telegraph more than 500 people were admitted to the city’s University Hospital in 2018 – with 186 of those being teenagers as the number of stabbings surged.

New figures show that a total of 505 people went in to UHCW last year, up from 376 in 2014 and higher than every year in between. With 186 of those admitted to hospital in Coventry last year being under the age of 18, a massive 135 of those were under 16, Coventry Telegraph reported.