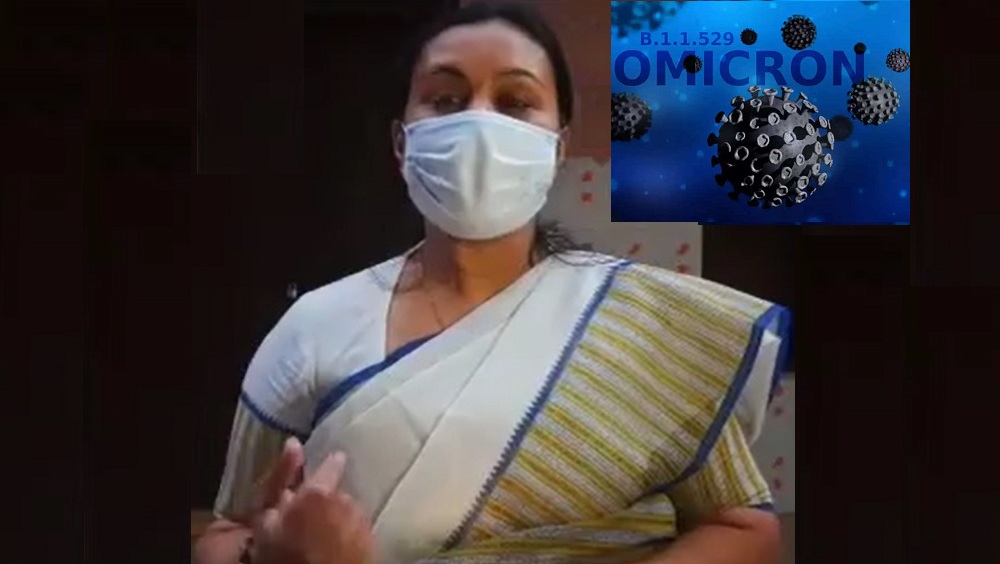 THIRUVANANTHAPURAM Dec 12: Kerala’s Health Minister Veena George confirmed today that the first person to be tested positive for Omicron variant in the state is a passenger who arrived from the UK.

The passenger who was tested positive for Omicron is a native of Ernakulam who arrived at Kochi airport on December 6 from the UK via Abu Dhabi.

He and his wife were negative during a Covid check at the airport on the first day. But the next day, when he showed symptoms, a test revealed that Covid was positive. After that the sample was sent for genetic testing. That’s where Omicron test was confirmed positive.

In a video posted on her Facebook page, the minister said that the patient was a Kerala native who recently came from the United Kingdom.

The patient’s condition is stable and there was no need to panic as the government was taking all necessary steps to curb spread of the new variant of the virus, she said.

Later, in a press release, the minister said the patient’s wife and mother-in-law have tested positive for COVID-19 and are undergoing treatment. All three are in a stable condition, she added.

The patient, a resident of Ernakulam, had arrived in Kochi with his wife on December 6 via Abu Dhabi on an Etihad flight.

Initially, he and his wife had tested negative for COVID-19, but as on the next day he showed signs of illness, another test was conducted and he was found positive, the release said.

Thereafter, his sample was sent for genetic testing and Omicron was confirmed, it said. Of the 149 passengers on the Etihad flight, those in the 26th to the 32nd rows have been included in the high risk category and they have to undergo COVID tests on Monday, the release said.

It further said that the Health department has taken all possible steps, like preparing the contact list, and all procedures have been followed as per the guidelines of the central government.

The minister, in the release, has said that extreme caution should be exercised since Omicron has been reported in the state. She said that the government was working to detect the virus in the early stages, ensure expert treatment for those infected and thereby, prevent the spread of the disease.

For those not falling in either category have been asked to carry out self-observation, the minister said and added that samples of RT-PCR positive people from high-risk countries were being sent for Omicron genetic testing

It is imperative to wear a mask properly, take two doses of the vaccine, maintain physical distance, wash your hands frequently, and ensure as much ventilation as possible in your room, the release said.

The Omicron variant was first detected in India in Bengaluru with two people testing positive for it comprising a South African national of Indian origin and a doctor. – PTI