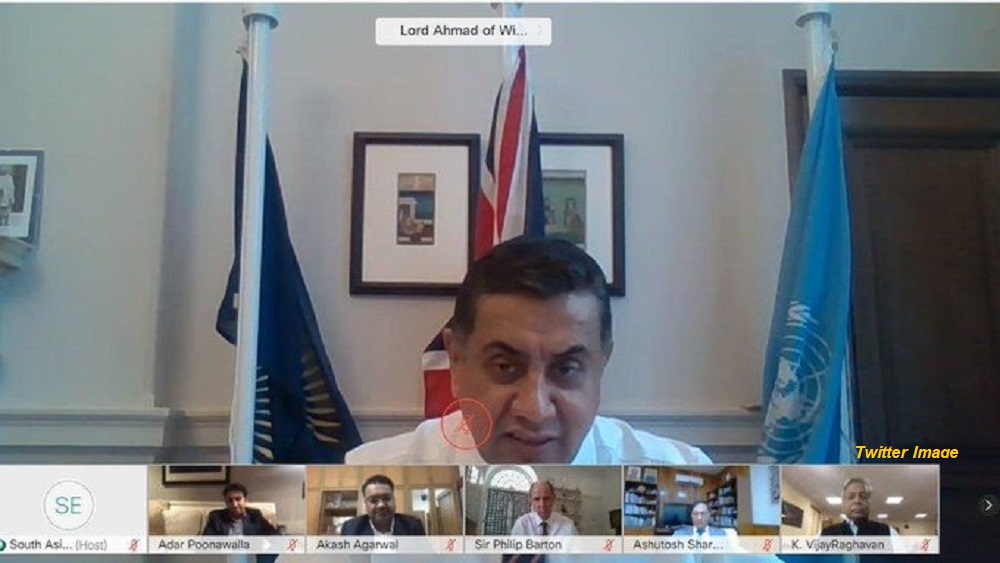 LONDON March 13: The role that India has played during the course of the coronavirus pandemic as the pharmacy of the world has been phenomenal, UK minister Lord Tariq Ahmad said as he prepared for a five-day, five-city tour of India starting on Monday.

Lord Ahmad, the minister for South Asia in the UK Foreign, Commonwealth and Development Office (FCDO), highlighted the close collaboration between the two countries on ensuring supplies of COVID-19 vaccines, which benefits countries across the globe through the United Nations-led COVAX facility.

“The role that India has played as the pharmacy of the world has been phenomenal,” said Lord Ahmad, during a pre-visit virtual interview on Friday.

“Our relationship with India is not just one of bilateral importance, it’s also about how these two countries are working together and there’s no better illustration than the current COVID-19 pandemic which grips us. The strong collaboration we have seen between the UK and India in responding across the world, including through the COVAX facility which is helping the more vulnerable countries in the world,” he said.

“Equally, we are looking forward to further cooperation with India in its tenure as a Security Council member. Environment and climate change, healthcare, technology – the relationship between the UK and India is an important one across all these sectors and more,” he added.

Lord Ahmad’s visit kicks off with ministerial meetings in Delhi and then covers Chandigarh, Chennai and Hyderabad before he flies back to the UK following trade and investment talks in Mumbai.

The minister said the tour would very much be “touching upon the important matters” of the planning for the visit of UK Prime Minister Boris Johnson, which is expected in the coming weeks to finalise the much-anticipated UK-India Enhanced Trade Partnership.

Mr Johnson’s visit to India is set to be followed up by Prime Minister Narendra Modi’s visit to the UK in June for the G7 Summit in Cornwall, where India is one of the guest countries invited by host-nation Britain.

“My very intensive and full programme reflects the incredible diversity that is India, and all its fantastic and incredible states and reflects the wide nature of the relationship and the bilateral engagement we have with one of our close partners,” said the minister, whose father’s roots trace back to Punjab and mother’s to Rajasthan.

The visit will also coincide with the release of the UK’s major foreign policy statement in the form of an Integrated Review next week, which is widely expected to confirm Britain’s decisive Indo-Pacific tilt in a post-Brexit era.

“It can be taken as read in as much as government policy is concerned, there is a very strong belief and focus on the Indo-Pacific tilt and it’s right we do so. When you look at the countries within that part of the region, India is foremost in our minds,” Mr Ahmad said.

Though the visit comes against the backdrop of a UK parliamentary committee room debate on the issue of farmers’ protests against India’s agricultural reforms earlier this week, the minister ruled out the issue in any way overshadowing his itinerary because the British government”s longstanding stance on the matter has been clear.

“We’ve always been consistently clear on matters such as these protests, it”s an internal matter,” he said.

India had strongly reacted to the debate as “gross interference in the politics of another democratic country”, after which foreign secretary Harsh Vardhan Shringla had even summoned British High Commissioner to the UK Alex Ellis, a meeting Lord Ahmad described as “very cordial”.

“Our position as a government is that the protests have been taking place for several months now and India as a democracy has totally guaranteed and secured the right to protest, which we fully acknowledge. There have been occasions where people have sought to disrupt those protests and that should be dealt with in accordance with the rule of law,” he said.

Farmers, mostly from Punjab, Haryana and western Uttar Pradesh, have been camping at several Delhi border points, including Tikri, Singhu and Ghazipur, since November 28, demanding a complete repeal of the three farm laws and a legal guarantee on the minimum support price for their crops. – PTI