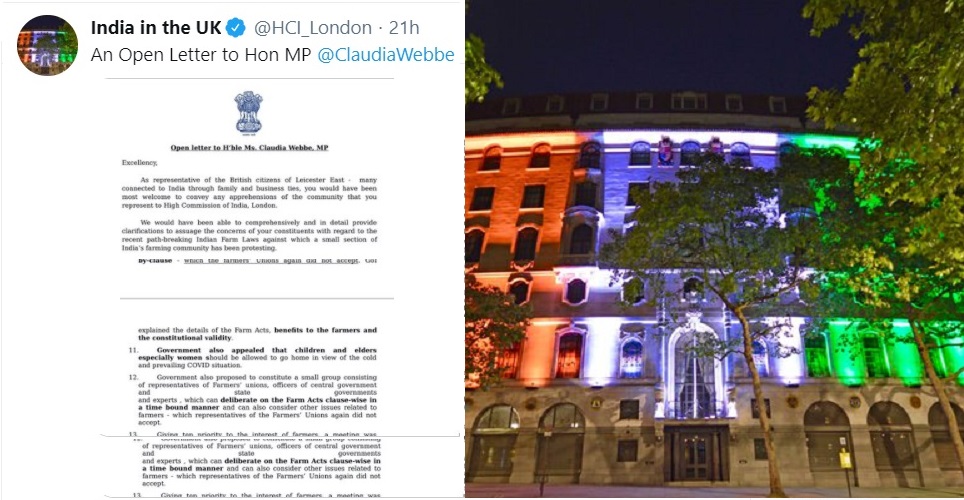 LONDON Feb 16: After United Kingdom Member of Parliament (MP) for Leicester East, Claudia Webbe extended her support to the ongoing farmers’ protest, the Indian High Commission in London wrote an open letter on Tuesday saying that the MP was welcome to convey any apprehensions of the community that she represented to the High Commission.

“We would have been able to comprehensively and in detail provide clarifications to assuage the concerns of your constituents with regard to the recent path-breaking Indian Farm Laws against which a small section of India’s farming community has been protesting.”

She also extended support to climate activist, Disha Ravi, who has been arrested in connection with the “toolkit” case, related to the farmers’ agitations.

Both women were targeted, arrested & imprisoned for peacefully supporting the #FarmersProtest

This suppression is driven by authoritarianism & free market capitalism

“Disha Ravi is 21; a student and climate activist Nodeep Kaur is 24; a labourer and Union activist Both women were targeted, arrested and imprisoned for peacefully supporting the #FarmersProtest This suppression is driven by authoritarianism and free-market capitalism. Don’t Be Silent,” Claudia Webbe tweeted.

The High Commission’s letter emphasised that the reforms, intended to protect and empower farmers in India are based on inputs from experts and recommendations by committees that have analysed the specific challenges of the agricultural sector in India over the last 20 years.

The Farm Acts were duly discussed and debated in the Parliament of India and their benefits have started reaching more than 100 million small farmers instantly. Since the enactment of these reforms, discussions have been held with farmers and other stakeholders on their efficient implementation, it further said.

With a section of farmers having reservations, 11 rounds of talks have been held. Though Government of India has suggested numerous ways to address their apprehensions – including postponing implementation of the Acts or amendment of the same, these options have been summarily rejected by them, it added.

The letter also said that the information was being shared with Webbe to dispel any misgivings with regard to the objectives of the reforms, the ability of those having reservations to protest peacefully and the willingness of the Government of India to address all concerns in a manner most acceptable to the protesting farmers’ unions.

The efforts continue – but Government of India is more than aware of efforts by vested interests abroad to fuel the protests through misinformation and incendiary assertions that are not helpful in progressing the dialogue between the protesters and Government or addressing the issues through the democratic processes that our people have traditionally relied on, the letter added.

It further said that the farmers participating in the protests rallies have been treated with utmost respect and restraint by the Government and security forces – more than may have been the case in similar situations elsewhere in the world.

Farmers have been protesting on the different borders of the national capital since November 26 last year against the three newly enacted farm laws: Farmers’ Produce Trade and Commerce (Promotion and Facilitation) Act, 2020; the Farmers Empowerment and Protection) Agreement on Price Assurance and farm Services Act 2020 and the Essential Commodities (Amendment) Act, 2020. – ANI