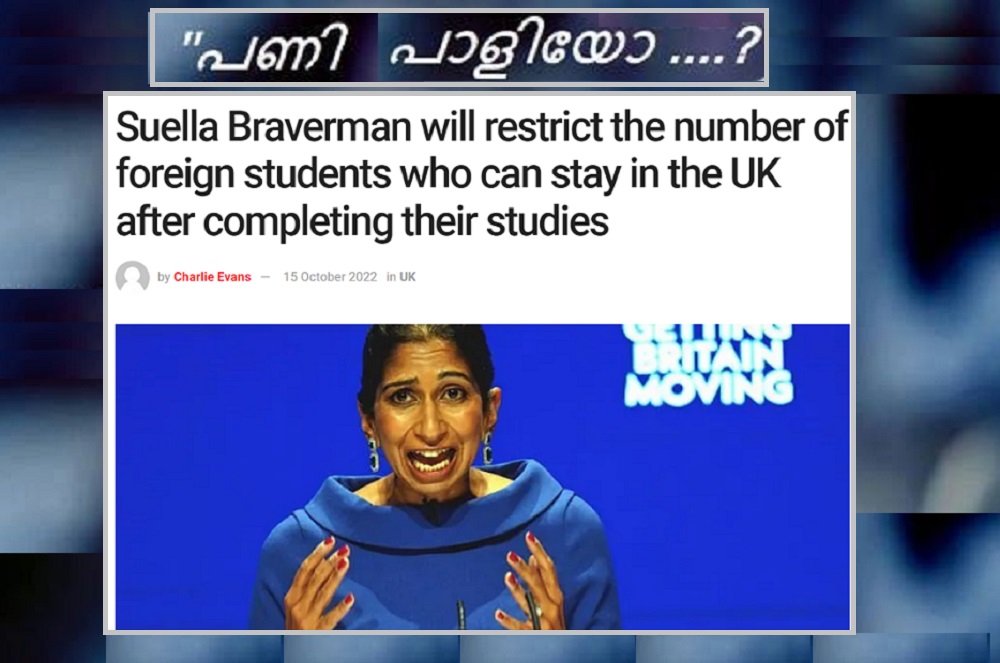 LONDON Oct 16: Home Secretary Suella Braverman is set to restrict the total number of foreign students who can remain living in the UK after graduating from university to slash immigration numbers, reports newspapers in the UK.

The Home Secretary wants to reduce the numbers of international students who can apply for a graduate post-study work visa, which allows any student who has passed their degree to remain and work in the UK for at least two years, Daily Mail reported.

The Home Office are considering restricting visa applications only to those who have completed studied in high-demand subject areas, such as engineering, the Times reported.

However, university bosses have slammed the Home Secretary’s plan, saying it sent a message ‘that the UK is unwelcoming and hostile to international students’ who make bring £25.9 billion per year to the UK economy through fees and spending.

Graduate visas were reintroduced in July last year after then-Home Secretary Theresa May scrapped them in 2012, reducing the length of time recent graduates can stay in the country to just four months.

Since the the new scheme was introduced, 66,211 international students have been granted the right to remain in the UK – 99 per cent of a total 66,787 applications.

Indian students are also the largest group of migrants to overstay their visas. Ms Braverman has said she wants to reduce the number of foreign students studying at British universities after a record high of 486,000 visas were granted last year.

An open letter to Ms Braverman signed by the chief executives of four groups which represent over 150 British universities – Universities UK , GuildHE, MillionPlus and University Alliance – have been heavily criticised her proposals.

They said that international students are the source of nearly 70 per cent of the UK’s education export earnings and bring an average financial benefits of £390 per person across the country – saying that increased international student numbers were a ‘resounding success for the government and something to be celebrated’.

‘The negative rhetoric suggesting a need to reduce international student numbers is unhelpful and counterproductive,’ the letter to the Home Secretary said.

‘It stands to directly impact on the continued success of one of the UK’s premier export industries and restrict economic growth.

‘Such rhetoric is also quickly reported on around the world, sending a message overseas that the UK is unwelcoming and hostile to international students.

‘That is why we would urge the government to restate its commitment to the ambitions set out in the International Education Strategy and to avoid language that suggests international students and their dependants may be unwelcome in the UK.’