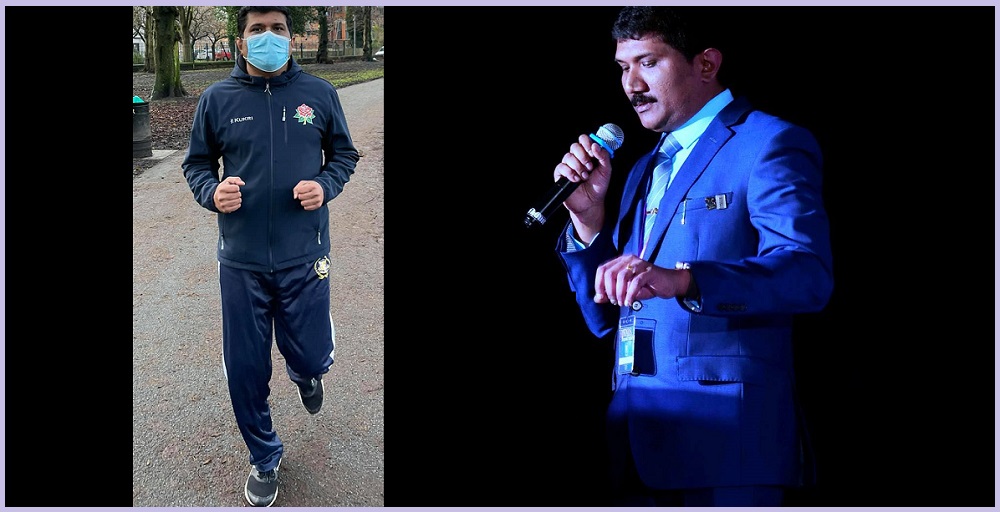 Jiju Simon taking to jogging after recovering from the second bout of Covid.

MANCHESTER Dec 23: A Keralite from Manchester in UK caught Covid twice in a span of 90 days and fortunately recovered both times. Jiju Philip Simon, an Advanced Clinical Practitioner at Manchester University NHS Foundation Trust, professional physiotherapist and a professional cricket coach had no known health problems or immune defects that would make him particularly vulnerable to Covid.

Jiju, aged 43, is a keen sport enthusiast who takes care of his health with regular sessions of badminton during winter and cricket during the summer months. He is also the chairman of Friends Sporting Club Manchester.

Jiju, being a clinical practitioner himself, shares about his illness which would be helpful to the community members and he asks all to take greater restraint with the onset of the new strain of Coronavirus which is fast spreading.

12th September: He tests positive for the first time

1st December:  He has been asked to self isolate, due to contact with a Covid negative patient who turned positive later.

3rd December: He develops symptoms again, this time including fever, headache, dizziness, cough, nausea and vomiting. He is not allowed to test because he has been tested positive within 90 days time.

5th December:  His family members started with Covid symptoms and tested positive on 7th of December.

7th December:  Jiju contacted HR and explained the situation with new onset of symptoms and got permission to test again.

9th December: He has been tested positive for Covid 19.

11th December: He developed post Covid pneumonia with upper thoracic pain. He called 111 for support and Ambulance service did the initial assessment and referred to Crisis Response team for prescription of antibiotics. With starting of antibiotics, he becomes nauseous and started vomiting. His BP and heart rate increased considerably and become short of breath. He called his GP for support who recommended hospital admission and Crisis Response has done his blood test which showed high D- dimer which is an indicator for blood clots.

He has been admitted to A&E for further management. He is in recovery phase now and slowly back to normal life.

According to Jiju it’s in early stages to identify if it was the original infection becoming dormant and then bouncing back or whether it’s the new strain of virus that has surfaced in the UK.

However, he says that this second onset of the virus proves that the previous infection may not necessarily protect against future infection which is believed by majority in our community. “I too believed that I would not get it again as I would have the antibodies from the first infection”, Jiju said.

He asked people who have recovered should continue to follow guidelines around social distancing, face masks and hand washing as we still do not know enough about the immune response to this infection.

Thus it is reconfirmed that people can catch Covid-19 twice. That’s also the emerging consensus among health experts who are learning more about the possibility that those who’ve recovered from the coronavirus can get it again.