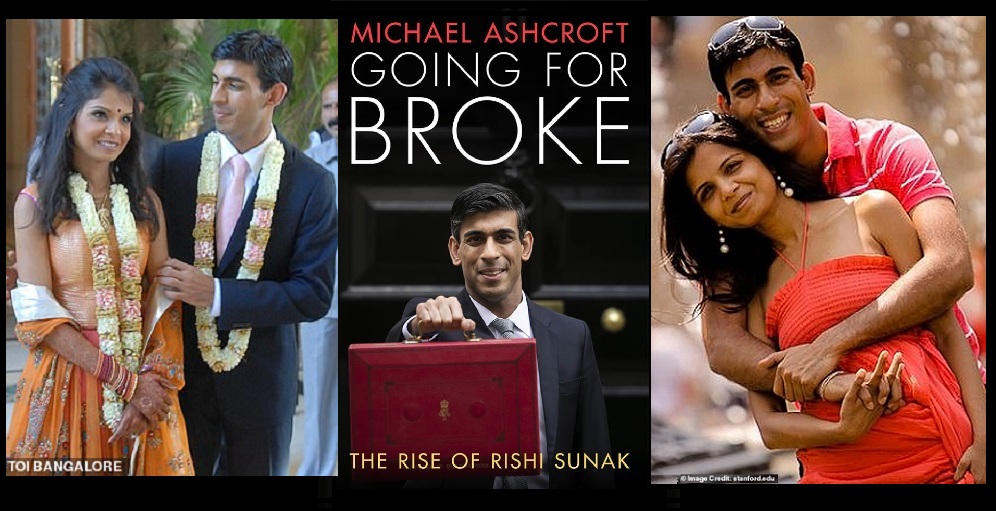 LONDON Nov 14: In the middle of 2019, Rishi Sunak was an unknown junior minister in the local government department. Seven months later, at the age of thirty-nine, he was Chancellor of the Exchequer, grappling with the gravest economic crisis in modern history.

Michael Ashcroft’s new book “Going for Broke: The Rise of Rishi Sunak”, launched on Nov 12, charts Sunak’s ascent from his parents’ Southampton pharmacy to the University of Oxford, the City of London, Silicon Valley – and the top of British politics.

It is the tale of a super-bright and hard-grafting son of immigrant parents who marries an Indian heiress and makes a fortune of his own; a polished urban southerner who wins over the voters of rural North Yorkshire – and a cautious, fiscally-conservative financier who becomes the biggest-spending Chancellor in history.

Sunak was unexpectedly promoted to the Treasury’s top job in February 2020, with a brief to spread investment and opportunity as part of Boris Johnson’s levelling-up agenda. Within weeks, the coronavirus had sent Britain into lockdown, with thousands of firms in peril and millions of jobs on the line.

As health workers battled to save lives, it was down to Sunak to save livelihoods. This is the story of how he tore up the rulebook and went for broke.

Rishi Sunak was born in Southampton General Hospital on May 12, 1980. His mother Usha worked as manager of Weston Pharmacy at the time, while father Yashvir was a GP whose surgery was on Raymond Road, Shirley. During school holidays, Rishi supported his mother at her new pharmacy business, which she had set up after her children had grown more independent. He helped with the accounts and book-keeping, a role that fostered a growing political awareness.

Speaking about his decision to go into politics many years later, he explained: “It was my parents who motivated me, but not in a political way. My dad was a GP, my mum a pharmacist, and I grew up working in their surgery; in the pharmacy; delivering medicines to people who couldn’t pick them up. People would always stop and talk to me about my mum and dad, saying, ‘Oh, you’re Mrs Sunak’s son, Dr Sunak’s son.’ And then they’d have some story about how my parents had helped them, or their parents, or children, and I thought that was amazing.

“They had done the same job in the same place for 30 years, and it was clear that they as individuals were able to have an amazing impact on the community around us, and that I found pretty inspiring. And that was my motivation for becoming an MP.”

An avid football and cricket fan, he is a passionate supporter of Southampton FC, whose prolific goal-scorer Matt Le Tissier was his childhood hero.

His family’s culture always remained of huge importance, with their life successfully incorporating both British and Indian traditions. Rishi has described how he was as often to be found at the city’s Hindu temple at weekends as he was at a Saints game. ‘You do everything, you do both – it’s part of my identity,’ he has said.

Rishi Sunak went to Oxford University and received a masters in business administration at Stanford University in the US. He became wealthy as hedge fund manager and married Akshata Murthy, the daughter of an Indian billionaire, before becoming MP for Richmond in Yorkshire in 2015.

The book also makes some revelations.

As Chancellor, Sunak failed to declare his wife Akshata Murthy’s businesses in the Register of Ministers’ Interests and at least one of her companies went on to furlough its staff.

Sunak looked “thin and faint” at height of the coronavirus crisis and had to be urged to eat by civil servants who were worried about his wellbeing.

The extraordinary story of his family background is told for the first time, including his grandmother’s brave solitary passage from Tanzania to England in search of a better life.

The story of his romance with Indian heiress Akshata Murthy, whose father Narayana is known as the “Bill Gates of India” – and Narayana’s fleeting jealousy when the couple got engaged.

Lord Michael Ashcroft, the author and a former Treasurer and Deputy Chairman of the Conservative Party, said: “I am delighted that this book has gone on sale at such a relevant time, with the Chancellor currently undertaking what is arguably the most difficult job in the country. Rishi Sunak has proved to be a fascinating subject for my latest book and I am delighted to be able to tell the story of the incredibly eventful first four decades of his life.”