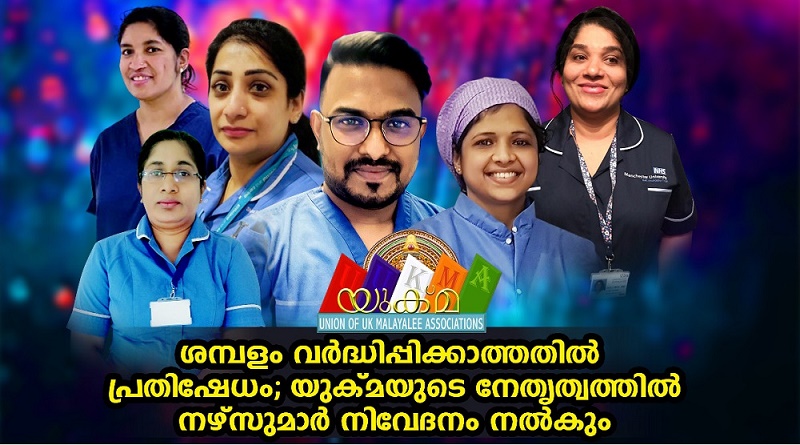 LONDON July 28: The healthcare industry and the UK public are shocked that the Boris Johnson government has completely ignored nursing staff in the pay hike announced for public sector employees in the UK.

The government, which has announced revised salaries for more than nine lakh public sector employees, has ignored the nursing staff who fought for their lives, amidst the Covid-19 struggle.

When all public sector employees, including doctors, teachers, members of the armed forces, prison officers, National Crime Agency staff, police officers, dentists and civil servants, are given a pay rise in recognition of their corona service the nurses alone were ignored.

It is very strange and paradoxical that nurses and other paramedical staff, health care assistants, ODPs, physiotherapists, ITU technicians and other clinical staff have to wait another year for a pay rise.

More than 90 per cent of the Malayalee families who migrated to the UK after 2000 came here through the field of nursing. Twenty-five per cent of the households are engaged in nursing – paramedical – clinical work.

In short, the wages of this section, which is neglected by the government, are the source of income for about 70 per cent of the UK Malayalee community.

In this context, National President Manoj Kumar Pillai and General Secretary Alex Varghese said that the UUKMA National Committee was working with other public sector employees to address the immorality of the government’s pay hike and to implement the pay hike for nursing employees as soon as possible.

Joe, in charge of the UUKMA Nurses Forum, secretaries Sajan Sathyan and Selena Sajeev and UNF President Sindhu Unni will lead the work. National Vice President Advocate Eby Sebastian said efforts were being made under the leadership of the National Committee to liaise directly with influential MPs in the cabinet and the opposition.

At a time when the country is facing serious challenges, the UUKMA National Committee urges all to co-operate with the campaigns launched by UUKMA to ensure justice for all employees in the nursing sector who are fighting for their lives.