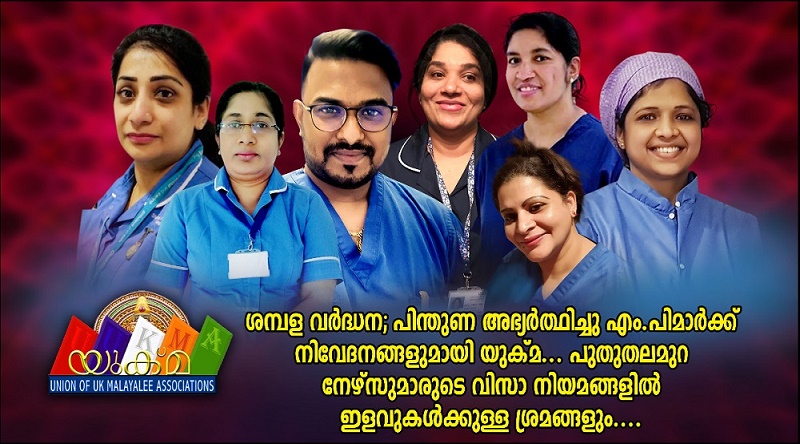 LONDON Aug 4: The UUKMA National Committee is moving forward with organized struggles for neglected nursing staff in the wake of the pay rise announced by the British government for public sector employees in the UK.

The Boris Johnson government, which announced the revised pay for more than nine million other public sector employees, is generally considered to be completely unjust and unethical in ignoring the one million nursing employees who fought in the Covid-19 struggle at the cost of their own lives.

More than 90% of the Malayalee families who migrated to the UK after 2000 came here through the field of nursing. Twenty-five per cent of the households are engaged in nursing – paramedical – clinical work. In short, the wages of this section, which is neglected by the government, are the source of income for about 70% of the UK Malayalee community.

In this context, National President Manoj Kumar Pillai and General Secretary Alex Varghese said that the UUKMA National Committee is going ahead with a campaign to address the immorality of the government’s pay hike, along with other public sector employees, and to demand that the pay hike for nursing employees be implemented as soon as possible.

UUKMA is demanding immediate implementation of 12.5 per cent pay hike for nursing sector employees with effect from this year, Refund NHS surcharge levied on health workers and families from 2015, offer work permit to existing nursing staff in recognition of the Covid struggle, Change to PR or Citizenship, Ensure no discrimination in employment.

The UUKMA National Committee has been urging local MPs to simplify the procedures faced by local parents and family members for visiting immigrant health workers.

As part of this, the process of direct submission of petitions to about 200 members of the British Parliament has been completed under the leadership of the National Committee.

The petitions are submitted through Malayalee nurses residing in each parliamentary constituency.

At the same time, efforts are being made under the leadership of the National Committee to liaise directly with influential MPs in the Cabinet and the Opposition, said Adv. Eby Sebastian, National Vice President.

In addition to effectively intervening in the issue of pay rises, the UUKMA National Committee is initiating efforts to grant immediate relaxation in visa rules to help thousands of newly arrived nurses bring their families and parents to the UK.

UUKMA Nurses Forum leaders Sajan Sathyan, Salina Sajeev and Sindhu Unni said they believed the country would treat these groups, who played a major role in the Covid struggle, with humane treatment.

At a time when the country is facing serious challenges, the UUKMA National Committee urges maximum cooperation with the campaigns launched by UUKMA to bring justice to all employees in the nursing sector who are fighting for their lives.

Those in places where there are no UUKMA member associations and interested in being a part of this campaign should contact Manoj Kumar Pillai (07960357679) and Alex Varghese (07985641921).