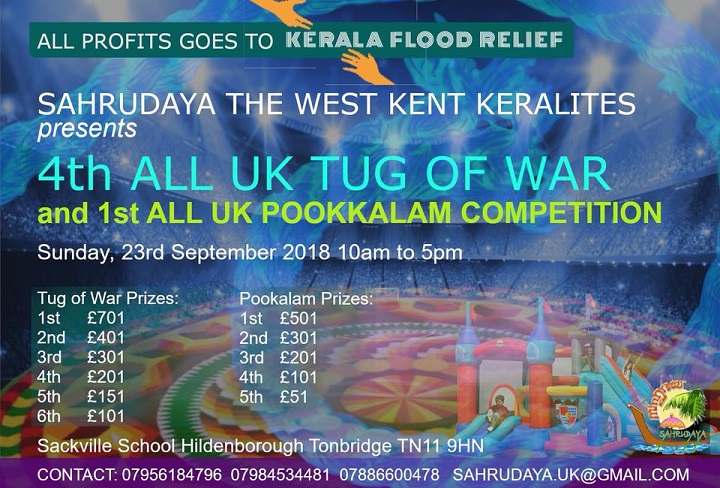 LONDON Sept 6: On September 23, 2018, Sahrudaya – The West Kent Keralites, will be organising two events at the same venue – “4th All UK Tug of War” and “1st All UK Floral Carpet Competition.”

Sahrudaya – The West Keralites, is a growing community association of Keralites, living in and around West Kent.

This year Sahrudaya is preparing to exhibit our best community spirit by organising such a big event with several participant teams and lots of spectators.

After the huge success of three consecutive years, Sahrudaya is proudly hosting the 4th All UK Tug of War Tournament. The biggest of such events in the UK with the most teams participating and huge spectators support.

Sixteen teams from various parts of the UK are participating in the tug of war tournament, making it the largest tug of war competition in the UK.

Sahrudaya is creating this great opportunity for Tug of War fans and families across the UK to make a memorable trip to Kent, The Garden of England.

The floral carpet is traditionally made out of the blossoms of several varieties of flowers of differing colours to design and decorate patterns on the floor.