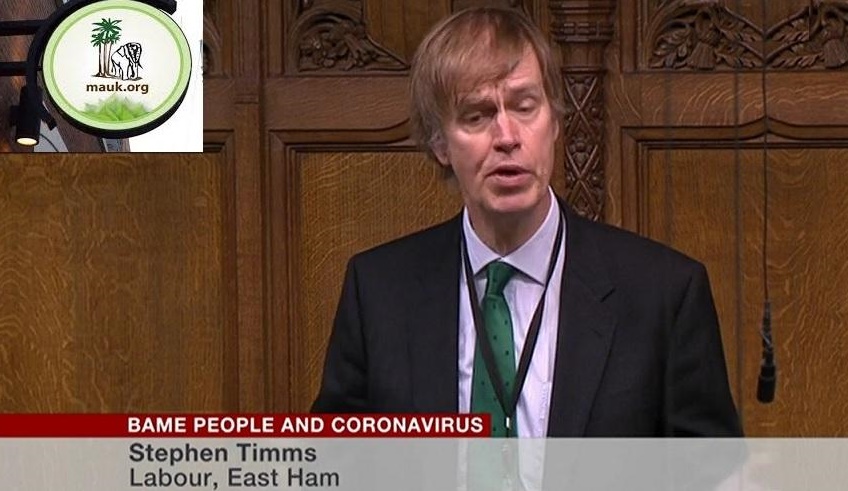 LONDON June 20: Stephen Timms MP for East Ham in London, has praised the efforts made by the Malayalee Association of UK (MAUK) during the time of the Coronavirus by providing assistance to those people who have been left without food.

Stephen Timms, while speaking in the parliament, highlighted the plight of people during the time of this pandemic by saying if it wasnt the case then there wouldnt have been so many community soup kitchens and organisations working at this time.

He also applauded the efforts of other south Indian organisaitons including the Tamil Sangam and the Ibrahim Mosque.

Stephen’s speech was made on 18th June 2020 while the proceedings were ongoing in the House of Commons discussing the two statutory instruments on international development followed by a debate on the impact of the coronavirus on Black, Asian and Minority Ethnic communities.

To listen to Stephen Timms speech please click the link below. Stephen Timms’ mentions about Malayalee Associaiton of UK at 3:35 of the video.

Stephen Timms was speaking for those people who are on No Recourse To Public Funds who are struggling to meet ends. He asked the goverment to suspend the no recourse to public funds barrier and allow those people who are here to claim benefits at the time of the pandemic.

Stephen’s request has been officially submitted to the Prime Minister through the parliament process and a reply is awaited.

No recourse to public funds (NRPF) is a condition applied to those staying in this country with a temporary immigration status. Indefinite Leave to Remain (ILR) is set as the general threshold for permitting migrants to access public funds.

Migrants who are here without leave are also subject to no recourse to public funds. This means they have no access to the majority of welfare benefits, including Universal Credit.

A million people with no recourse to public funds can’t access the universal credit. Apparently, there is a form on the .gov.uk website to make an application to waive this condition. However, the request could take about two months to get a reply. “If you are destitute you can’t wait two months” he said.

“This condition must be suspended by government during the Coronavirus crisis” he added.

The Local Government Association, which represents councils, has also requested the removal of NRPF condition. A high numbers of people with NRPF condition have been approaching councils for support during the pandemic following loss of employment.

The suspension of the NRPF condition would enable people to access welfare benefits, which could prevent them from becoming homeless.

To listen to Stephen Timms speech please click the link below.

Stephen Timms’ mentions about Malayalee Associaiton of UK at 3:35 of the video.