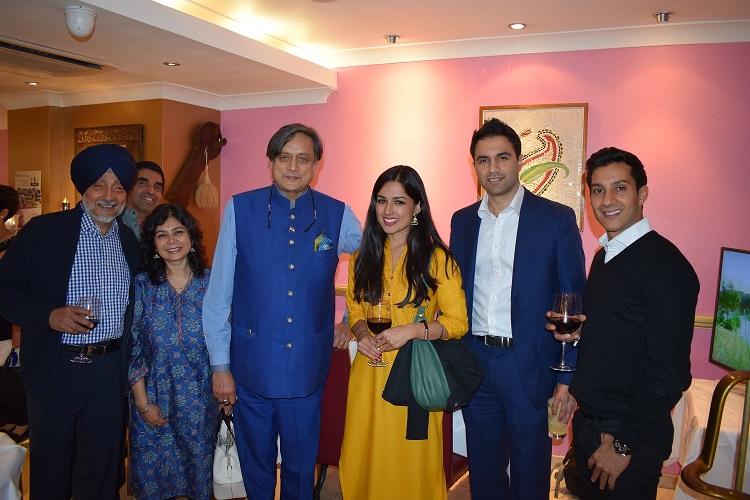 The event, hosted by Rasa Restaurants, was a sold out event which was attended by distinguished professionals from the Malayalee and Indian community. The event began with an introductory and welcome speech by Avinash Tharoor, the main organiser for the whole event.

Chairman of Rasa Group of Restaurants Das Sreedhar, spoke about the flood situation in Kerala which also affected his business in Chalakkudy.

Sashi Tharoor MP delivered the keynote address by giving the auidence an update on how Kerala flood situation was addressed in its initial stages with a coordinated effort by the people of Kerala. He said that Keralites held together irrespective of any divisions. He praised in particular the fishermen community, who he is looking to get them an international honour.

He then later on took questions from the attendees and answered them.

The funds raised will go to Goonj, a non-governmental organisation headquartered in Delhi, India which undertakes disaster relief, humanitarian aid and community development in parts of 22 states across India. Goonj focusses on clothing as a basic but unaddressed need.

It was founded in 1999 by Anshu Gupta. For his work with Goonj, he was awarded the Ramon Magsaysay Award in 2015. In 2012, he was named India’s Social Entrepreneur of the Year 2012 by Schwab Foundation, a sister organization of World Economic Forum. Goonj has engaged in flood relief activities with the “Flood Overcome” programme during the 2013 Uttarakhand floods, and on 2014 Kashmir floods through the project known as “Rahat Floods”, and now the 2018 Kerala floods by collecting relief supplies from people across India.