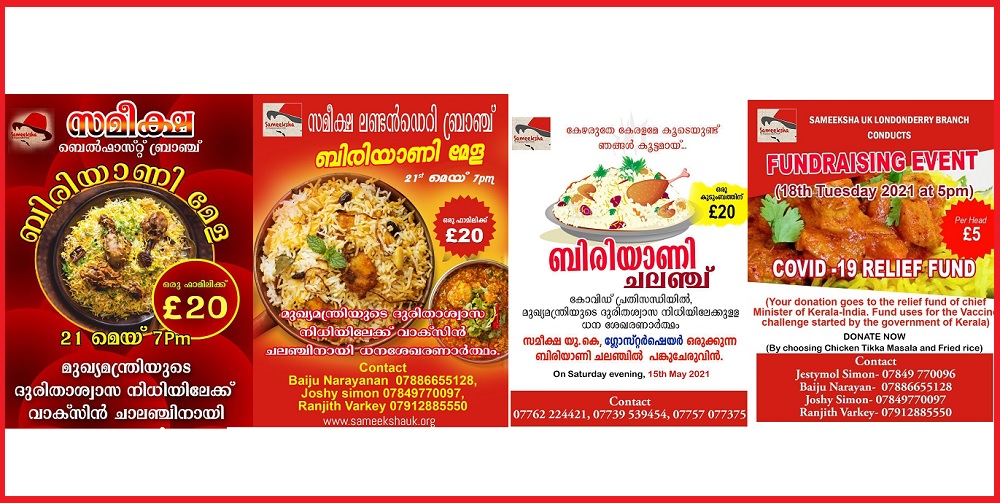 LONDON May 15: Sameeksha UK is organising Biryani Fair and Payasa Mela to raise funds to offer a helping hand for Kerala to fight Covid.

The second wave of Covid has shaken the whole of India. It is not new that Malayalees living in developed countries lend a helping hand when their homeland is in trouble.

Sameeksha UK’s various branches in the UK have decided to lend a helping hand to Kerala by raising funds through Biryani Mela and Payasa Mela.

The money will go to the Chief Minister’s Disaster Relief Fund.

The Biryani Fair will take place on the 15th, 18th and 21st of this month at branches such as Gloucestershire, Londonderry and Belfast.

Initial steps have already been taken at rest of the branches and soon dates will be made available.

More than 200 orders have already been placed with the Londonderry branch by Altnagelvin Area Hospital. The orders for 18th May are coming from those of British descent, who were born and raised in this country.

In addition, more than 100 orders were received from Gloucester Royal Hospital. Food will be specially prepared for them on the 15th. All these orders will be bought and delivered by them, Sanoj Mathew, Gloucester branch secretary said.

Sameeksha is in the hope of raising a large sum of money for the country of birth.