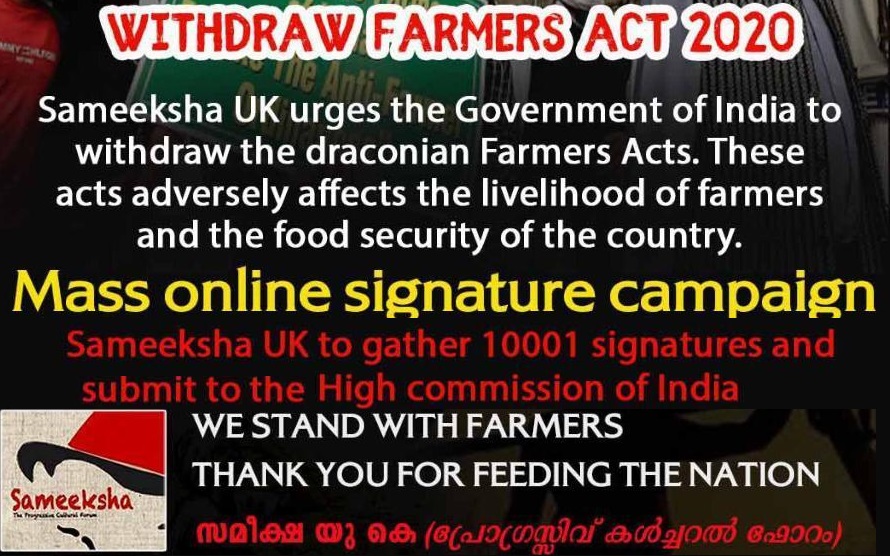 LONDON Dec 25: Sameeksha UK, a progressive organisation of the Malayalee diaspora in the UK is extending their support to the Farmers struggle in India. They have now launched an online campaign to obtain signatures from supporters of the Farmers struggle.

According to them the farmers are the backbone of the country and they have fed millions of Indians. The online petition titled Save Indian Farmers, calls to withdraw the draconian Farmers Act 2020 and doesn’t ask for donation, but only your endorsement and support.

The petition reads as below:

The farmers in India are protesting against three draconian acts passed by the Government of India in an undemocratic manner.

These acts are, The Farmers’ Produce Trade and Commerce (Promotion and Facilitation) Act; The Farmers (Empowerment and Protection) Agreement of Price Assurance Act; and Farm Services and The Essential Commodities (Amendment) Act.

These laws are not only a blatant attack on the federal structure of the Constitution but also adversely affect the livelihoods of millions of small and marginal farmers across the length and breadth of the country. It will also have far-reaching consequences, on the country’s food security.

These laws will open agricultural sale and marketing outside the notified Agricultural Produce Market Committee (APMC) mandis for farmers, remove the barriers to inter-state trade, and provide a framework for electronic trading of agricultural produce.

Dismantling the mandi system without assurance of price will bring an end to the assured procurement of their crops at Minimum Support Price (MSP).
Similarly, the price assurance legislation may offer protection to farmers against price exploitation, but will not prescribe the mechanism for price fixation. Farmers are demanding the government guarantee MSP in writing, or else the free hand given to private corporate houses will lead to their exploitation.

The farmers cannot go to Court in case any dispute arises and would be at complete mercy of these business houses. The act also promotes contract farming there by helping billionaire businessmen like the Adanis and Ambanis to have control of the farmland and letting them to control the entire food supply chain.

Taken together, the reforms will loosen rules around sale, pricing and storage of farm produce – rules that have protected India’s farmers from the free market for decades. They also allow private buyers to hoard essential commodities for future sales, which only government-authorised agents could do earlier.

These laws were passed by the Modi Government in a completely undemocratic manner in the Parliament and with no respect for the strong opposition of the farmers and workers. The farmer’s organisations were not consulted before introducing the law. Suggestion by the Opposition to refer the Bills to a select committee was not considered by the government.

As per the 7th Schedule of the Indian Constitution, agriculture, agricultural markets, education, research and land are the primary legislative domains of the states. The Modi government has chosen to encroach upon the states’ domain and enter into bitter confrontation with the states. This is against the spirit of cooperative federalism enshrined in the Constitution of India.
The constitutionality of the laws are also being challenged in the Supreme Court.

When the farmers raised their voice and started a peaceful agitation they are being harassed at every step. The protesters were stopped with barricades, trenches dug on roads and they were hit by water cannons and tear gas shells by the police to prevent them from reaching the National Capital Delhi and repel them from protesting peacefully, a Right given by Constitution of India. The human rights and democratic rights of the protesting farmers are being violated.