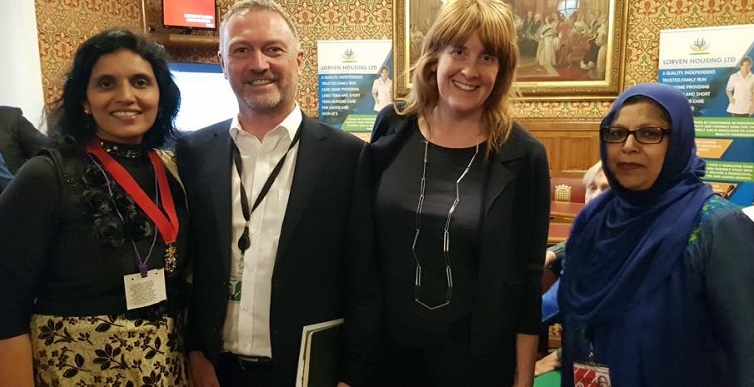 LONDON July 15: Manju Shahul-Hameed Foundation for Mental Health is celebrating it’s 2nd anniversary. By the kind invitation of the Hon. Baroness Uddin, the event was held at the House of Lords to celebrate the achievements of the charity so far.

It was great to get everyone together to recognise the Foundation’s progress and celebrate. There are many more events being planned going  forward to another great year for MS Foundations.

The 2nd anniversary event for the Manj Shahul-Hameed Foundation was held on the 11th July, starting at 6pm on a glorious summer day in London. The event was well attended by many of Councillor Manju’s colleagues, who all played an important role in supporting her in setting up the charity and through her career. Key sponsors of the charity including the national Lottery Community fund and Broad Green Big Local were also in attendance, as well as representatives from organisations that MS Foundations frequently partners with including Age UK, Croydon University Hospital, Mind Croydon, Croydon BME Forum, Parchmore Medical Centre and many more.

As Councillor Manju and many of the speakers said, the most powerful results can be obtained by working in partnership rather than on your own. Being connected with these important local organisations has been integral to the close up work MS Foundations is able to do with the community in Croydon. Also present were friends and family of Councillor Manju, Professors from Greenwich University and volunteers from the charity. This diverse mix of people, all passionate about making a difference in mental health in Croydon made for a very warm reception and great atmosphere.

Manju Shahul-Hameed Foundation for Mental health was set up by Councillor Manju, Councillor Toni Letts OBE and Mr Abdul Rauf and started on the 1st May 2017. The charity aims to improve the mental wellbeing of people in Croydon by holding educational events on mental health and activities such as mindfulness and laughter yoga to promote wellness.

These events are free and accessible to the community. As the 2nd anniversary poster states, one of the main aims is to transform mental health stigma.

This is a particularly important factor as shame or fear of stigma plays a big role in preventing those who need it from accessing help. The increasing isolation these individuals face leads them down a negative spiral of mental health. Working to reduce stigma is a slow process as some parts of the community may be difficult to reach and there may be many social and cultural factors that need to be understood and overcome to break the stigma.

This is why the community events that MS Foundations holds are so important; they give people a safe place to learn about mental health, meet others so that they feel less alone and promotes a sense of
community. The aims of the charity are also much wider than just tackling mental health, by holding events that promote social cohesion the communities that are strengthened are better able to support individuals that might need help.

Inspired by her early work with Age UK, one of the key events that MS Foundations holds are inter-generational events where young people and the elderly (who are much more likely to be isolated) are brought together to benefit from each other’s energy and wisdom.

This promotes the idea of aging well and reduces loneliness in the elderly and allowing young people to learn from them. Other important events are laughter yoga sessions, sessions with professional speakers on mental health and dementia, and monthly feeding the homeless.

The event was wonderfully compered by Arya Nagwani and featured a dance recital by Ayrin Rauf and a song by Ayra. Both of them testament to the talent and potential the young people of Croydon have.

Interspersed throughout the event were videos about the work of the charity. These showed the key aims of the charity and featured testaments from some of the people the charity has helped as well as a compilation of events held (the laughter yoga was particularly well received by the attendees) and video clips from the charity’s first anniversary.

It was very inspiring to hear speeches from people who are so devoted to the cause of improving mental health, the mood was sometimes sombre and reflective as we contemplated the magnitude of the issue and considered the current environment for some of the most vulnerable members of society.

But there was always a return to hope and determination as we learned
about many of the speakers long careers and passion in providing a better environment for the people of Croydon and beyond.

There was also a great sense of celebration as we celebrated the progress of the charity and many of the speakers delivered glowing praise to
the charity and to Councillor Manju in her career and community activities.

Specific notes on key speakers Starting off was Steve Reed MP, the Labour and Co-operative MP for Croydon North. He has campaigned and won funding for a new A&E in Croydon and run an inquiry into racism in mental health services.

Supporting everyone despite their back ground was the main call to action and he highlighted the need for grass-roots support for these communities.
Next was Former Mayor of Croydon Toni Letts OBE. Current Military and business champion of the council and founder of the Croydon Family Justice center.

She praised the work of MS Foundations, especially the inter-generational events that help reduce loneliness in the elderly and invigorates them to live well. Being one of the founding members she hoped the charity would grow for many years to come.

Sarah Jones MP is the Labour MP for Croydon central and shadow Housing minister. She helped to deliver the 2012 Olympic games and chairs the parliamentary group on knife crime.

She spoke about the importance of removing mental health stigma to improve access to help and also about people who might be more vulnerable and face barriers to help.

She spoke about the power of community spirit and how providing events and spaces for it to be developed could increase the resilience of the community by helping it to support individuals in need.

The mayor of Croydon, Councillor Humayan Kabir was next. He has a strong interest in developing local business in Croydon and celebrating it’s rich diversity. Also focusing on the importance of mental health for a prosperous community he wanted to call to attention the positives of Croydon and its potential for the future.

Arriving from an audit for a new housing development, Councillor Tony Newman spoke next. Chair of the London Government Association’s Housing committee, he spoke about the great need for enough affordable housing.

With a proportion of Croydon’s young people going without a permanent home, this has great impact on their mental wellbeing. He spoke about Government needing to address these inequalities throughout the UK and provide more support for mental health.

With budget cuts affecting many local councils, he praised the work of charities such as MS Foundations for providing support to local communities.

Stephen Waring is the NHS Liaison Manager, responsible for all policy and project development relating to the NHS and care services for London. He was representing Mayor of London Sadiq Khan and GLA. He spoke about the harmful effects poor mental health can have when not supported.

It is vital for government to provide support and a good environment for the wellbeing of its people so they can realise their potential and be productive members of society. He spoke about how London plans to improve mental health support as part of their goals to be the happiest and healthiest city.

The speaker from the national Lottery Community Fund, Kim Debling, spoke about the progression of mental health in individuals who are isolated or feel shame about their conditions, the profound effects it can have on their self-esteem and their lives.

She was proud The National Lottery Fund is able to work with many charities that aim to help people in these situations and highlighted the importance of mental health education. Particularly of communities that might feel ignored or isolated.

She recognised the slow pace that reducing mental health stigma can have and praised the work of the charity for doing the groundwork and persevering. She ended with the fact that we are all valuable and have a place in society, a great message of encouragement for those struggling with mental health.

Having been in her career for over 40 years she also acknowledged the slow and sometimes frustrating process of changing peoples’ perception of mental health for the better, and improving mental health services.

Despite the slow process, her perseverance and dedication in her career was inspiring to hear about. She spoke warmly about the aims of the charity in reducing stigma and looked forward to a future where her grandchildren could grow up in an understanding and supportive society, where everyone has equal access to support.

Konan of the popular South London rap duo: Krept and Konan attended and spoke about what inspired them to set up their own charitable organisation. They set up PD Foundation to help set young people in the community on the right path.

They started the restaurant ‘Crepes and Cones’ in Croydon that provides part time jobs to students and young people from disadvantaged backgrounds. Having grown up in Thornton Heath, Konan was inspired to give back to the community after Krept and Konan’s success in music.

He spoke about how he aimed to inspire young people by providing them with jobs and giving them the confidence to open their own businesses, pursue their dreams and not feel limited by their background.

The event was concluded by a speech from Councillor Manju. She spoke about her own personal journey and how it inspired her to set up a mental health charity. She thanked the people who supported her throughout her career.

She thanked all the partner organisations that MS Foundations has worked with for their vital role in reaching out to communities and helping break down mental health stigma.

After thanking all the attendees, taking the time to acknowledge everyone’s input into the charity there was an award to the sponsor of the event, Mr. Ananda Kota from Lorven Housing Ltd and time to network and take pictures.

It was a very inspiring event and despite the challenges ahead, everyone left looking forward to making progress and the future of the charity.