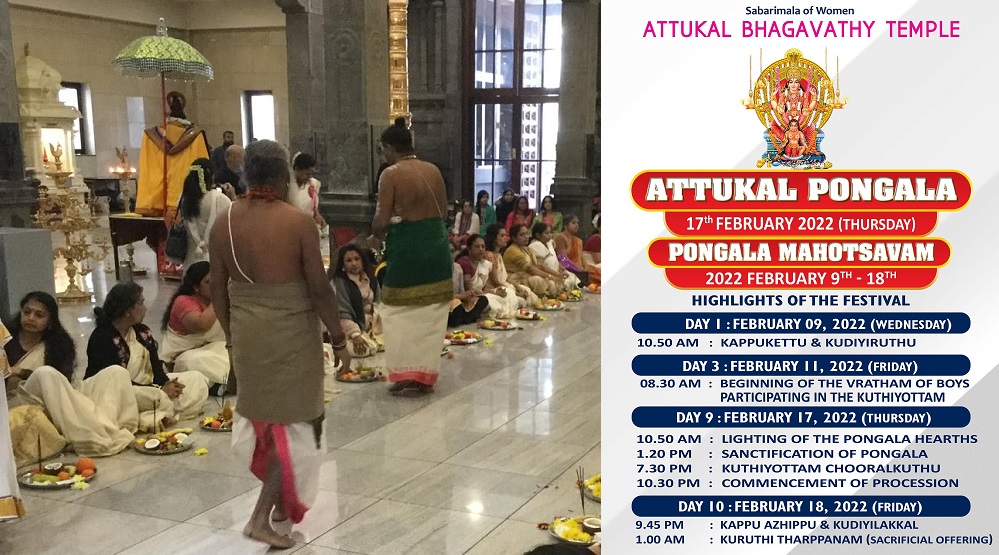 LONDON Feb 15: The Pongala Mahotsavam, the most important festival of Attukal Bhagavathy Temple, based in Thiruvananthapuram in Kerala will be celebrated in London at the Sri Murugan Temple in Manor Park, East Ham on Thursday, February 17 from 9am.

Attukal Pongala, one of the world’s largest all-women religious congregations, will be held on February 17 in Kerala. Preparing ‘pongala’ is considered an auspicious ritual of the annual festival of the Attukal Bhagavathy temple in Thiruvananthapuram, Kerala.

It is the British Asian Women’s Network which has once again provided an opportunity to offer Attukal Pongala on February 17 at the East Ham Sri Murugan Temple, which is prominent among Hindu worshippers in London.

This is the 15th consecutive year the Attukal Pongala is being held in London. It wouldn’t have been possible without the leadership of the Social and Cultural Association of Malayalee Women in Britain (BAWN), who are devotees of Attukal Bhagwati.

The puja sacraments will begin on Thursday, February 17 at 9am, the same day as it being held in Kerala.

The organising committee estimates that about 1,000 Bhagwati devotees will arrive at Sri Murugan Temple in Newham from all over the UK this time.

Organizers and devotees say that every year Attukal pongala becomes a source of long-term inspiration for many experiential testimonies.

The British Asian Women’s Network, which has carried out many charitable activities, is also one of the chief sponsor of the London Breast Cancer Society.

The London Sri Murugan Temple has become one of the most frequently attended venue in Atukalamma’s Sannidhanam outside Kerala.