Kombans won the final by a 61 -run victory over Sahrudaya Royals Cricket Club from Tunbridge Wells.

Kombans player Amal Baby, who scored 104 runs in three matches, won the Best Batsman award and the Man of the Match award for his 45 runs in the final.

Sahrudaya Royals entered the final by defeating hosts Maidstone Super Kings A team in the first semi-final played on the Oakwood Pitch. 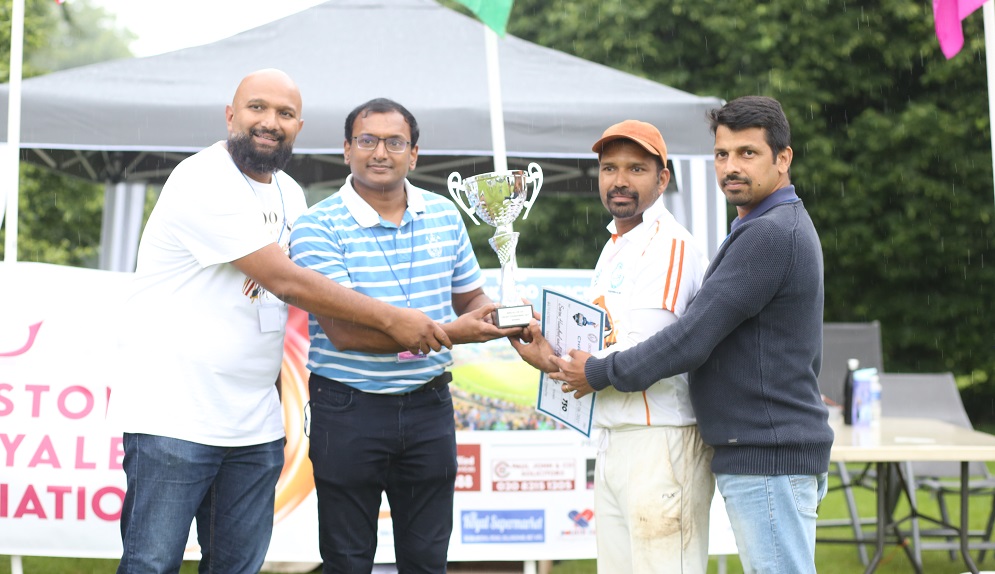 MMA President Raji Kurian inaugurated the tournament, which began at 8.30am on Sunday at the Maidstone Oakwood Park Ground.

The organizing committee, which was formed for the smooth running of the tournament, was able to hold all seven matches on time, including the final, before the rains. Under the leadership of Maitri, the women’s wing of the MMA, meals were arranged at moderate prices for spectators and players from morning till evening.

Members of MYC’s Youth Wing, MYC, performed well on both grounds with arrangements for the competition.

The winners received cash prize of £750 sponsored by Allied Financial Services and an Everrolling Trophy awarded by MMA.

The runners-up received cash prize of £500 from Paul John Solicitors and MG Tuitions and the MMA Everrolling Trophy, while the semi-finalists were presented with trophies instituted by MMA.

The awards for Best Batsman, Best Bowler and Man of the Match were also distributed by MMA.

President Raji Kurian said he was proud to be able to put on a spectacular cricket tournament for the spectators despite the adverse conditions. The President thanked all the team members, association members and all those who contributed to the success of the competition, which is enough to be inscribed in gold letters on the pages of the MMA.