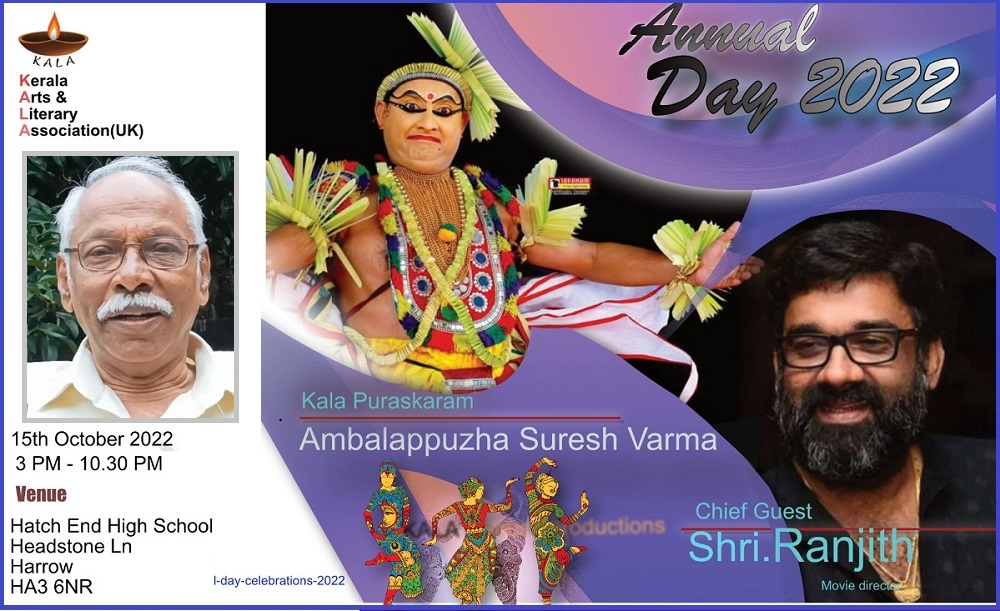 KALA takes great pride in promoting and preserving the rich cultural heritage of Kerala and perseveres to this end by identifying and honouring the most outstanding of the artistes in Kerala each year.

The chief guest for the event is Ranjith Balakrishnan, renowned film director, screenwriter, producer and actor. He has directed several movies including great hits such as Spirit, Indian Rupee (National Film Award 2011), Pranchiyettan & the Saint, Paleri Manikyam and Thirakkatha (National Film Award 2008). His directorial debut was Ravanaprabhu (2002), the sequel to Devaasuram. Ranjith will grace with his presence and interactions during the event.

Noted writer and lecturer M. N. Karassery, will join the annual day event.  Kala UK’s  prestige publication Palm Leaf will be released by M. N. Karassery during the event. Mohiyuddin Nadukkandiyil Karassery, commonly known as M. N. Karassery, is a writer and critic of Malayalam language. He is known for his writing and lectures on politics, literature, art and culture, and is a recipient of K.M. Seethi Sahib Memorial Human Fraternity Award and holds the distinguished chair in Malayalam studies at University of Calicut.

The programs will start with reception at 3pm and will end by 10:30pm. KALA performances this year will include in-house mega dance-drama production “Dashavathara” and a variety of programs by their members, including “Chowalloor Anusmaranam” – a program dedicated to Kala’s soulmate Late Chowalloor Krishnankutty.

As this is KALA’s first face-to-face annual since the pandemic, it would be an event for all to be together for the annual again and share the exciting afternoon of nostalgia and entertainment.

As usual, there will be a sumptuous dinner during the evening.

KALA requests you to bring along your friends and their families and make this program a grand success!

Note:
1. Paid members of KALA need to log in to get the Member prices for the Passes. All others can pay for the passes without logging in.
2. Members should use their emails as registered with KALA. Member prices are only available to these logins.
3. First time users (or if you have forgotten your credentials) click on “Forgot your Password” in the login screen to reset it.
4. Non Members and Guests are welcome to pay for the passes and attend.
5. Passes with QR codes are sent to the attendee emails and need to brought to the venue for entry.
6. Member prices are for Members and immediate family (spouse/children)
7. Members bringing guests along should purchase Guest passes. You will see the option to purchase these once you are logged in.