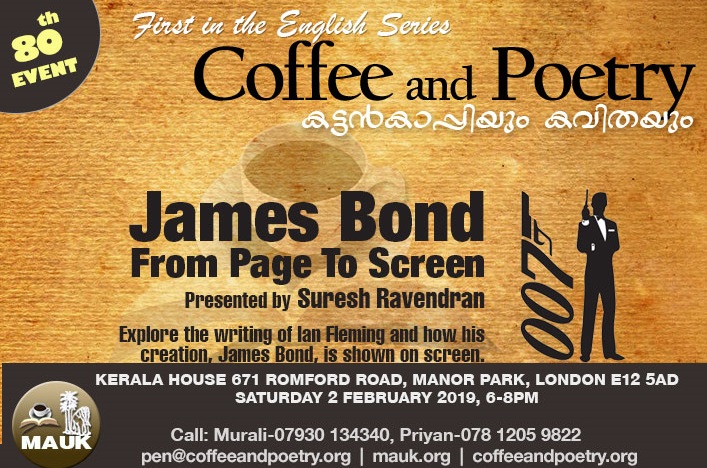 The first in the English series will be presented by Suresh Ravendran on Saturday February 2, 2019 from 6pm to 8pm at Kerala House, 671 Romford Road Manor Park London E12 5AD.

The meet will expore the writing of Ian Fleming and how his creation James Bond is shown on screen.

James Bond – From Page to Screen

Ian Fleming, best known for his James Bond series, was a famous English author, journalist but also a navel intelligence officer. He came from a wealthy family and his father was an MP. During WW2, Fleming was involved in planning Operation GoldenEye, the title of a successful James Bond film.

Fleming wrote his first Bond novel Casino Royale, in 1952 but he also wrote the famous children’s book ‘Chitty-Chitty-Bang-Bang’. He died in 1964 at 56 from heart complications due to heavy drinking and smoking.

We will be looking at Fleming’s style of writing, including mood, character development and plot.

Fleming used a ‘hooks’ at the end of each chapter to increase excitement and pull the audience in.

We will also be watching scenes from James Bond films and comparing his literature style with how this is shown on screen.