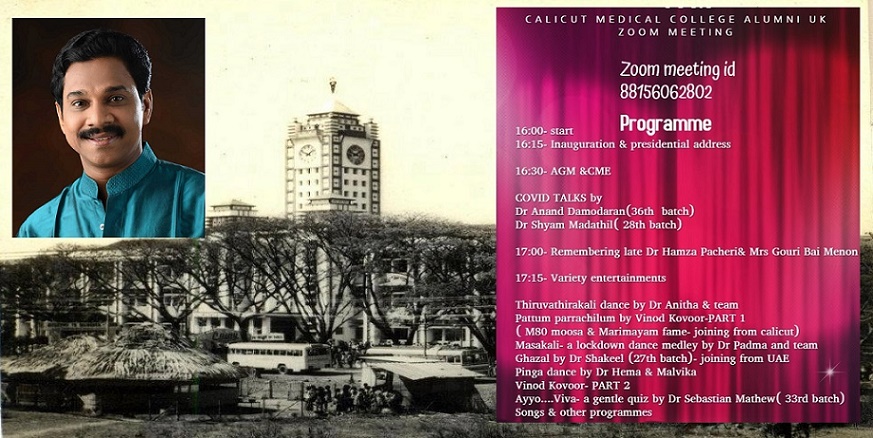 LONDON June 26: In a first, the Calicut Medical College Alumni in the UK (CMCAUK) are kickstarting normal association activities with the first event to be held on June 27 (Saturday) from 4pm.

Although the programmes are held via the Zoom platform, the activities will be telecast Live from each ones homes. This will include traditional and modern dances which the attendees could watch it Live from the comforts of their home.

The programmes will start at 4pm with the inaguration and presidential address. This is followed by the Annual General Meeting and CME.

As the world is still going through the pandemic times, two of the members – Dr Anand Damodaran and Dr Shyam Madathil will deliver talks on Covid-19.

The event will also remember two of its members who passed away during the time of the Covid pandemic – Dr Hamza Pacheri and Mrs Gouri Bai Menon.

This is followed by variety entertainments as below:

To lighten the whole event noted comedian from Kerala Vinod Kovoor will present Pattum Parrachilum from Calicut through Zoom. Vinod Kovoor gained attention in the comedy show Marimayam, broadcast by Mazhavil Manorama, which conveys a real picture of public offices in Kerala.

He is also known for his role as “Moosakka” in M80 Moosa, a serial on Media one channel. He has written books on his favorite realm, mimicry and mono-act.

His first book Ekabhinaya Samaharam has 25 scripts, and most of it deals with social issues and his second book Kalolsavam Monoact was also released.

Dr Shakeel will join in to present a ghazal from the United Arab Emirates.

Pinga dance by Dr Hema and Malavika will be performed.

Vinod Kovoor will come back again to regale the audience with some more fun matters.

The final event will see a Ayyo Viva, a gentle quiz by Dr Sebastian Mathew which will be followed by songs and other programmes with the whole event winding up at 20.30.

The CMCAUK was officially formed in 1983, with the aim of providing a platform for doctors and dentists who graduated from Calicut Medical College, Kerala, India  residing in the United Kingdom  to meet and interact socially.

All medical and dental graduates/ post graduates of Calicut Medical College as well as former staff members residing in UK are eligible for membership.