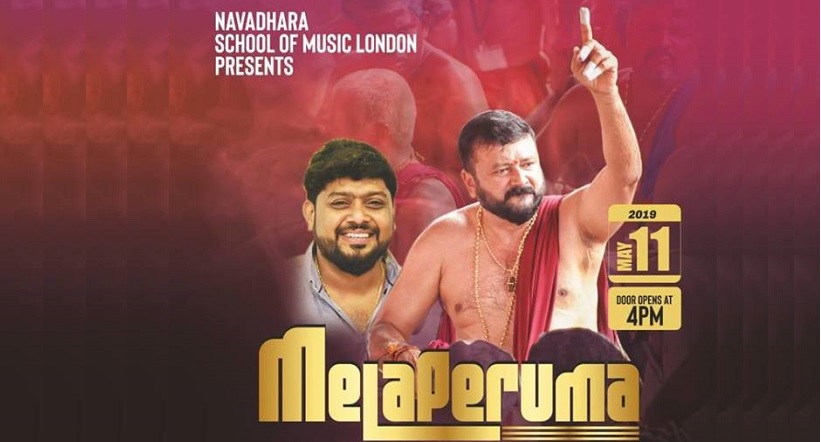 LONDON March 27: London will witness the first ever Chenda Melam festival on May 11, 2019 from 4pm at the Harefield Academy, Harefield, Uxbridge UB9 6ET. This will be an opportunity for connoisseurs of this art form to experience one of the rich and authentic traditional art form of Kerala in London.

The event which will start from 4pm will be held in two sessions. Noted film actor Jayaram and other fifteen artistes from Kerala will regale the audience for the first session.

The Kerala team will be joined by the UK team of chenda artistes lead by Vinod Navadhara and around 100 others who will perform Panjari and Shinkari Melam.

The second session will have music and comedy lead by Jayaram and Mithun of Comedy Utsav fame from Flowers TV. Singer Wilswaraj and mimic artiste, who can mimic 200 artistes within 15 minutes, Satheesh Kalabhavan will entertain the audience.

It is the first time a Chenda Melam of this scale is happening outside Kerala. There will be a musical-mimics Megashow London Live Orchestra A “Chenda Melam” means percussion using Chenda.

The Chenda is used as a percussion instrument for almost all Kerala art forms like Kathakali, Kodiyattam, Theyyam etc.

Chenda melam is the most popular form in Kerala, for more than 300 years. A Chenda melam is an integral part of all festivals in Kerala. There are 7 types of “melangal” viz Panchari melam, Champa, Chempada, Adantha, Anchadatha, Druvam and Pandi melam. Tickets are sold through Navadhara School of Music or can be purchased online at https://www.tickettailor.com/events/melaperumauk/