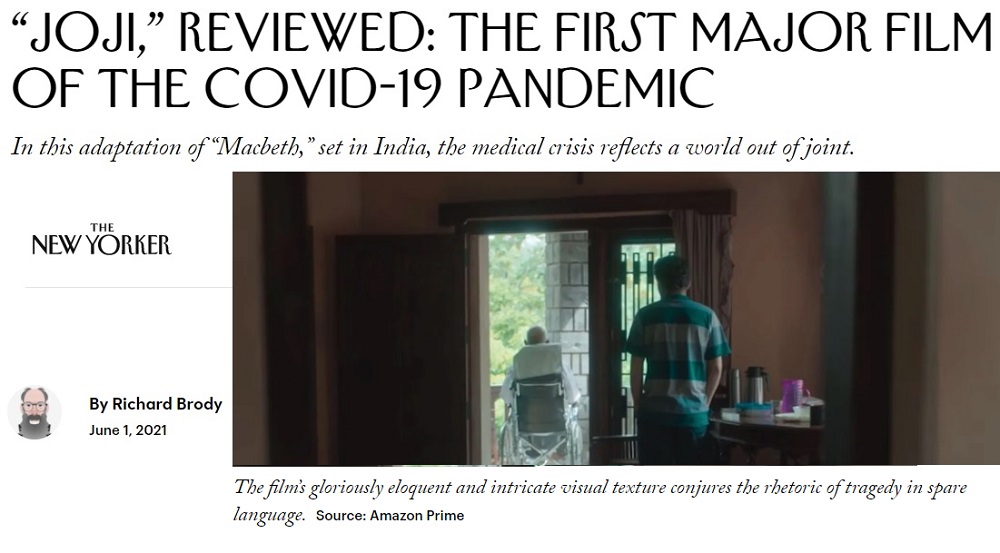 NEW YORK June 3: Famous American magazine The New Yorker has reviewed Malayalam film Joji and has come out praising its direction, script and treatment given to it during the time of the Covid pandemic.

The review, written by Richard Brody for the New Yorker, says that the present medical crisis due to Covid reflects a world out of joint.

After watching several films he finally finds a movie that integrates the pandemic gracefully and intelligently into its story and praises the brilliance of director Dileesh Pothan.

According to him the script, by Syam Pushkaran, is both practical and fiercely expressive.

According to the magazine, Joji is a film that subtly combines the Covid situation with the story.

The review mentions about a scene as an example of how Covid situation is used in the film very creatively to suit to the story. Bincy, a character in the film, asks Joji to wear a mask when his father’s body is brought home.

Released on Amazon Prime on April 7th, Joji has received a great response.

The film is produced by Dileesh Pothen, Shyam Pushkaran and Fahad.

Click to Read The Review in The New Yorker