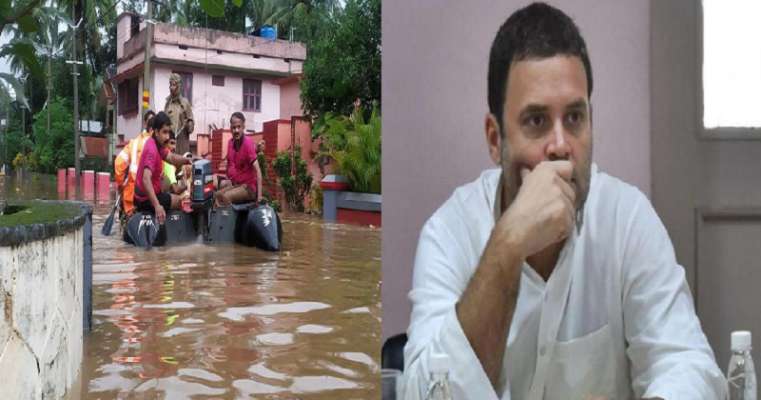 Wayanad Aug 14: Congress leader Rahul Gandhi Tuesday wrote to Prime Minister Narendra Modi, seeking his intervention to protect both the life and livelihood of the people in his Lok Sabha constituency Wayanad, ravaged by floods and landslides.
In his letter, the Wayanad MP suggested that many lives can be saved if early warning systems are installed to alert people living in vulnerable areas in the ecologically sensitive hill district.

Rahul Gandhi, who concluded his two-day visit to his flood-hit constituency on Monday, explained to the Prime Minister the issues being faced by people and ecology in Wayanad and suggested measures for his consideration.

“Developing a long term strategy and an action plan supported through a special package of assistance to protect both the life and livelihood of people and environment in Wayanad to be taken up on priority,” Mr Gandhi wrote.

“Many lives can be saved if early warning systems are installed to alert populations in vulnerable areas and specially designed landslide/flood shelters with communication facilities are provided in such places,” he said.

He said the destruction of forests and the depletion of inflow into the streams and rivers endanger farms and populations in three states- Kerala, Karnataka and Tamil Nadu.

“Mining and quarrying continues in the Western Ghats. The depletion of the forests is rapidly increasing conflicts between animals and people living within and in the periphery of the forest,” he said.

Mr Gandhi said Wayanad has some of the most fragile parts of the Western Ghats and is home to 10 per cent of the biodiversity of the country.

“I would like to highlight the twin crisis one that affects the life and livelihood of people in Wayanad and the second, the critical status of the ecology in an area that is known as a global hotspot for biodiversity with the potential to contribute to carbon sequestration benefiting the country as a whole,” he wrote.

Highlighting the crisis in the agricultural sector in Wayanad, Rahul Gandhi said a large number of farmers have committed suicide in the last two decades due to crisis in the farm sector.

He said agriculture and animal husbandry are the mainstays of the people in Wayanad.

However, paddy cultivation that also sustained wetlands and has the capacity to hold excess rainwater and mitigate flood damage, has been steadily declining since 1970s, he added.

Rahul Gandhi had tweeted on Friday that he spoke to PM Modi on the flood situation in Kerala and sought assistance for those affected in the State, including in his constituency Wayanad.