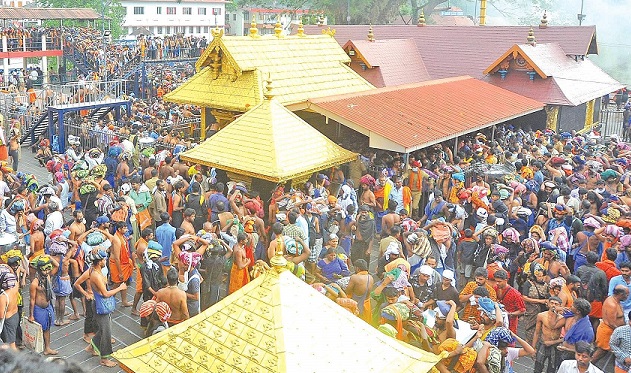 NEW DELHI July 30: The Nair Service Society (NSS) on Wednesday told the Supreme Court allowing women belonging to all age groups entry into the Sabarimala temple will change the character of the deity and the temple and the principal deity Lord Ayyappa himself doesn’t want it.

Nonagenarian Supreme Court counsel K Parasaran appeared for the NSS before the five-member Constitution Bench hearing a bunch of petitions challenging the ban on entry of women belonging to the 10-50 age group.

“The Ayyappa idol in Sabarimala is said to be a Naishtika Brahmachari(celibate).  Lord Ayyappa at Sabarimala is unique since he is celibate and doesn’t want the presence of women aged between 10- 50 as it will affect his penance. When the Lord Himself doesn’t want them, who are we to say they should be allowed,” Parasaran contended, saying while the Hindu religion is very tolerant and doesn’t discriminate, there are indeed aberrations.

“Those coming to the Sabarimala temple should not come in the company of young women. Children, mother and sisters are exceptions. The reason is those coming to the temple must not follow the ‘brahmacharya’ (celibacy) but they must also appear to follow it,” the senior advocate said.

“Article 25(2) reiterates the object of Article 17 (abolition of untouchability) in the specific context of temples and Hindus to send a loud and clear message,” he said.  “You (Parasaran) say throwing open public temples to all sections has no religious connotations. What will happen, if the state comes out with a law to bring social reforms and allow women entry inside the temple,” the bench asked.

Kerala is an educated society and 96 per cent of its women are educated and independent, Parasaran submitted, “It is a matrilineal society. Therefore to assume that the practice of the Sabarimala temple is based on patriarchy is fundamentally incorrect,” he said.

Parasaran concluded by saying, “The court should interpret (the issue) in a way so as  not to disturb the character of deity in the temple.”  The hearing remained inconclusive and will continue tomorrow.